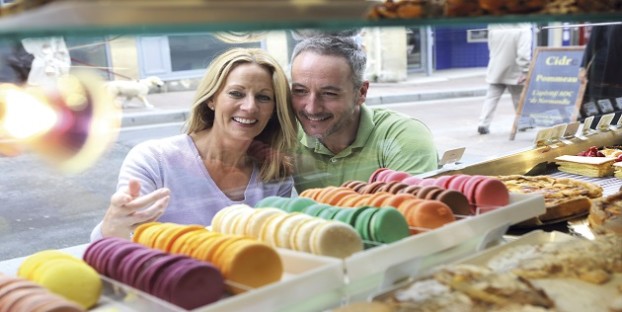 French patisserie is famous the world over and you’ll find a range of delectable tarts, cakes and sweets in even the most humble village bakery in France. From buttery artisan croissants to delicate macarons, jewel-like fruit tarts and classic eclairs, the rows of delicious treats will find you spoilt for choice! Next time you are lucky enough to find yourself in a French cafe or patisserie why not try one of these less well known pastries? With fascinating stories behind them these regional specialities are part of French history!

These cupcake sized versions of the larger Kouig-Amann pastry originate in Brittany and take full advantage of the outstanding butter made in the region. Layers of dough, butter and sugar are baked together for a rich, sweet, crunchy-topped result that can be flavoured with pistachio, rose, chocolate, lemon, almon, hazelnut, orange… the list goes on, and of course, this means that one kouignette is never enough!

Taking eclairs to the next level these gorgeous choux pastries feature a larger circular bun topped with a mini version. Both buns are filled with creme patissiere and each is topped in sweet ganache icing before they are stacked and joined together with piped vanilla cream. They usually come in coffee or chocolate flavour with the chocolate version giving the pastry it’s name as the dark chocolate and white cream give the look of a (rather rotund!) nun in her habit.

Hailing from Bordeaux these cute pastries are baked in moulds and are usually little more than bite-sized. The golden caramelized crust hides a soft, custardy interior that is traditionally flavoured with vanilla, however as with kouignettes, creative bakers have experimented by introducing a myriad of flavors to try. Enjoy Cannelés after dinner with liqueurs or coffee and a dab of Chantilly cream.

Two passions of France collide in this delicious choux pastry bun that was inspired by a cycling race between Paris and Brest in 1910. The doughnut shape was used to symbolise a bicycle wheel and is filled with praline cream and topped with caramelised hazelnuts – you only have to taste one to see why the
recipe has been popular for over a hundred years!

Not one to try baking at home unless you are an accomplished baker, this sophisticated cake is as complicated as any opera storyline! Precision layers of syrup-soaked cake and coffee buttercream are topped with a mirror-shine chocolate ganache and served in perfect rectangular slices. A French classic
that’s been made here since 1903, and a must for anyone who loves those coffee-almond-chocolate flavours.

These unassuming almond sponges are a deliciously light and tasty accompaniment to your cup of coffee but they weren’t always so popular; the almond flavour was associated with arsenic in 17th Century France when they were first produced, which rather put people off! With a makeover into the shape of a gold ingot and a new name to match, a Parisian baker revived its fortunes in the 19th century. Today you can try almond Financiers with added raspberry, pistachio or lemon for a different take on the
traditional recipe.

Unsurprisingly originating in St Tropez in the South of France, this brioche bun sandwiched around a sweet cream filling was created in 1955 for Brigette Bardot who was in town filming ‘And God created woman’. The original recipe remains a secret but versions of Bardot’s favorite treat are now found all over France using vanilla creme patissiere to fill classic golden brioches.

Another traditional recipe dating back to the 1800s is Clafoutis. Originating in Limousin and meaning ‘filled’, this deep baked pancake is created by pouring thick batter over fresh fruit and baking until golden to make a wonderfully light and juicy tart. The traditional fruit of choice was cherries but whatever is abundant and in season will be used, you might even see a savoury version made with tomatoes!

No trip to France would be complete without spending time at a pavement cafe or patisserie sampling the delights on offer. French patisserie is eaten first with the eye, and presentation is very important. The tempting window and counter displays are sure to reel you in, and the mouth-watering flavours and sheer variety on offer will keep you coming back!

Plan your next trip with us and choose a self-catering cottage in a charming French village and
your local patisserie might turn out to be dangerously close to your doorstep!