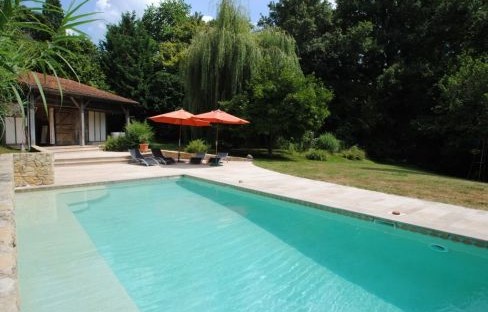 A day’s drive from St Malo can take you to many amazing French destinations but the Pays Basque is a favourite for many Francophiles.

Situated roughly halfway between the Atlantic coast and the Pyrenees, it is still quiet and unspoilt and, unlike the Med where the climate can be too hot, there are cooling breezes to accompany the summer sun. In fact the warm season is long here with September and October being quite glorious months and, according to Murray and Pam Kent, the autumn is reminiscent of New England in the fall.

The Kents discovered this region back in 2002 and loved it so much, they built this Basque-style house near Saint-Jean-Pied-de-Port for themselves as well as the many guests who return time and time again.

The villa sleeps eight in four double bedrooms (one with en-suite and a balcony) and the open plan living area has three sets of french doors opening onto the terrace and gardens where you can take in the views, eat al fresco and enjoy a dip in the salt water pool.  On cooler evenings it is a welcome retreat with its large open fire place and comfy sofas, especially after a day spent walking the hills.

Activities from sea to sky

The area offers so much to do and the Kents have helpfully suggested a programme of activities to keep you busy all week. These include visits to the seaside towns of St Jean de Luz and Biarritz, the villages of Saint-Etienne-de-Baïgorry and Espelette as well as trips to Spain – the house is just over an hour away from Pamplona!

The mountains around are fabulous for bird-watchers with an abundance of birds of prey including golden eagles and Griffon vultures.

Nearer to home the beautiful bustling market town of Saint-Jean-Pied-de-Port, which is a UNESCO World Heritage Site in the foothills of the Pyrenees, is just a short drive away.

This town is the final stopping point before crossing into Spain on the Saint Jacques de Compostela pilgrim route as well as being the old capital of the traditional Basque province of Lower Navarre. The architecture here is well worth seeing, particularly the ancient citadel walls and gates.

On the doorstep and just a short walk from the house is the village of Saint Martin d’Arrossa and the wonderful Hotel Eszkualduna Chez Katina, a family run hotel with English-speaking staff. The Murrays cannot recommend the hospitality highly enough but for the serious foodie they suggest trying the lamb chops at Zubiondoa just across the river in the village of Osses; apparently they are to die for!

Although they don’t live nearby, the Murrays are easily contactable as there is wi-fi in the house and the neighbour next door is on hand to greet guests.

So whether you are a mountain climber, walker, surfer, hang glider, white water rafter, pony trekker, music lover, gastronome or just a sun worshipper, there is something here for you!