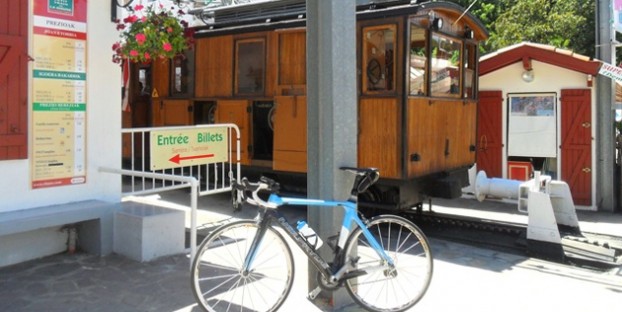 In his first article about cycling in France, Alan Grant shared some of his favourite cycle routes around Annecy in the Rhone Alps. In this second instalment, Alan discusses some of the routes around Biarritz and the Pays Basque…

Biarritz is today best known as a surfing mecca, the pounding waves that crash into its beaches from the Bay of Biscay producing year-round sets of breakers, but the beautiful Basque town is also a brilliant base for cycling holidays in the Aquitaine region of France.

Pyrenees and the Pays Basque

Looking south from Biarritz it’s obvious to see the main attraction for cyclists – the Pyrenees. While the famous mountain range that separates France and Spain is not at its majestic highest by the time it hits the Atlantic, the lower-level climbs in the Pays Basque are still long enough to test the legs and the scenery is greener, less barren and more varied than in some of the high mountain passes inland to the West.

To get to these foothills and cols near Biarritz take the main coastal road south towards the Spanish city of San Sebastian. While obviously not as crowded as the nearby autoroute, it’s still a pretty busy road, but as with most regions of France, motorists are tolerant of cyclists as long as you don’t hog the middle of the road.

South to the Spanish border

Even without hitting the hills proper, the trip south to the Spanish border involves a fair bit of climbing; my first ride of last summer, an out-and-back exploratory journey down to the frontier town of Hendaye produced 700 metres of ascending in just 50km. The road passes through the towns of Bidart, Guethary, St Jean-de-Luz and Urrugne, and each offers a beautiful beach and plenty of cafes and restaurants to stop for a morning café … or an afternoon pastis perhaps. 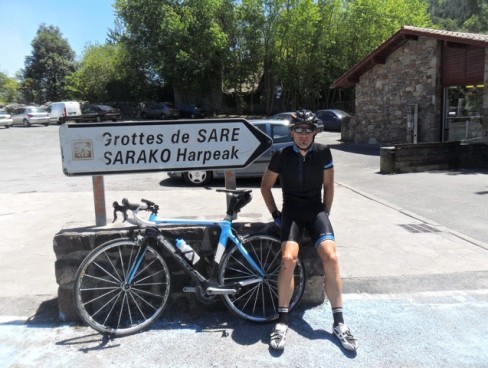 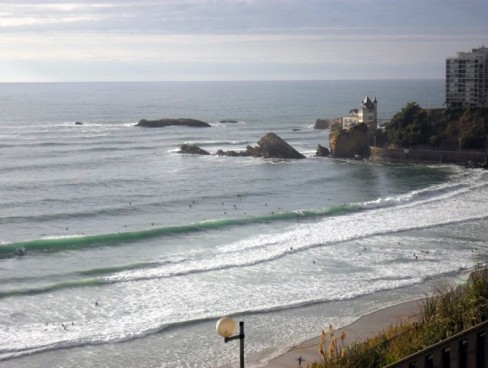 For most of my subsequent rides I followed the same route south but took a left onto the D918 at St Jean-de-Luz to get to the foothills. Instantly the traffic is gone and a more relaxed vibe ensues. The hills get larger as the road moves towards them and after only 5km, a right turn takes you into the village of Ascain, where a signpost at a picturesque fork in the road offers choices to the left – the Col de St Ignace – and the right – the Col d’Ibardin.

The former involves a short and gentle climb (2.5km at 5.4 percent average) to a hamlet marking the Col St Ignace, elevation 192 metres. Its main claim to fame is a funicular train to the top of La Rhune, the highest peak in the Pays Basque.

Alas, it isn’t possible to climb to the 905m summit by pedal power from the French side. I’m told it is accessible from Spain, but looking at the unpaved road from the summit I’d suggest that it wouldn’t be suitable for road bikes.

To get to the top of La Rhune, you could lock up your bike then either jump on the train or hike up it. As I was out exploring when I first discovered the col, I didn’t do a bike-hike biathlon but I returned a few days later with my family by car. My parents and the kids took the former option while my brother and I, and our lovely wives opted for the cross-country vertical scramble. The views from the top over the whole of the Basque country and the Atlantic Ocean make it worth it.

Alternatively, you can skip straight by the train and swoop down the other side of the Col de St Ignace and head for the Grottes de Pare, a collection of prehistoric caves. Again, there are no huge climbs for the 10km it takes to get there, but the rolling hills of the beautiful countryside can take their toll, especially if you’ve already been out on the road for three hours as we had on the day we sought out the caves. By the time we eventually found them we were in dire need of some sustenance but luckily a small café at the visitor centre was our saviour on what was a hot day.

But let’s return to that fork in the road at Ascain, something I did numerous times during my stay in the region…

The right turn delivers you along a typically winding and rolling route for about 7km to the foot of the Col d’Ibardin. The official climb to the top of the 317 metre high pass is only 3.8km long and averages 6 percent but it seems much tougher than the St Ignace.

Fortunately, a hotel/café marks the “summit” of the col if a break for a hot drink is required. Or if you find it wasn’t tough enough, there’s a bonus in the shape of a steep pitch of a road up to an adjacent ski station. This section is only 700m long but it averages 10 percent and you definitely need your granny gear for the last brutal 150 metres. The view of La Rhune from here is spectacular.

The route into Spain

It’s a dead-end so it’s back down to the hotel where you can either return the way you came or follow the road down the other side of the pass… into Spain! The 6.5km descent to the village of Bera is glorious. The road seems wider and better surfaced than on the French side and the frequent hairpins aren’t scary at all. It’s also quite cool to find yourself in another country within the space of 10 minutes or so; the architecture and vibe are subtly but noticeably different even though the official border straddles the Basque country. Time restraints meant we didn’t do any further exploring across the border but there are endless roads worth checking out.

The gradient of the climb back up the now-called Ibardin Avzoa averages out at a steady-sounding 4.1 percent but the steepness varies and with a distance of 6.1km it’s a fair test.

I should note that while the hills closest to Biarritz aren’t the highest or toughest in France, they still involve going up so I was glad to have brought with me my Neil Pryde Alize, a top-end carbon road bike which proved equally perfect for the sharp climbs and the meandering through the endless green valleys. In general, any sort of bike in decent mechanical condition should be good enough to tackle the routes I’ve mentioned.

However, options for hiring bikes in Biarritz are limited compared to other parts of France I’ve travelled to. There is a branch of Takamaka, a company specialising in outdoors adventures. They don’t have any top-end road bikes on offer but the mountain and city bikes are of a good standard.

Exploring Biarritz and beyond…

If you don’t fancy taking your rented bike to the hills, you could simply explore the narrow streets of the town and the old port areas. And just north of the city centre, on the aptly named Boulevard des Plages, a bike path offers another option. A trip along this is a perfect short excursion for families and the 10km stretch of road leads to one golden beach after another, each with food and drink options and places to sit down and just take in the summer beauty. You can’t get lost as the road eventually halts where a small river enters the Bay of Biscay.

I merely touched on the cycling possibilities in Biarritz. A ninety minute drive would have taken me and my bike to Pau, the gateway to some of the legendary climbs made famous by the Tour de France, such as the Col d’Aubisque and the Col du Tourmalet.

It would also have been easy enough to ride into the stunning city of San Sebastian, and from there explore more thoroughly the Spanish side of the Basque Country, where a number of medium-sized mountains await. We drove there, and it is a treasure. Or we could have headed north towards the vineyards of Bordeaux. The options are endless when you visit this stunning part of France and I’ll certainly explore next time…

Alan Grant is an avid cyclist who travels to France annually for cycling holidays.

One response on “Cycling in Biarritz, France”