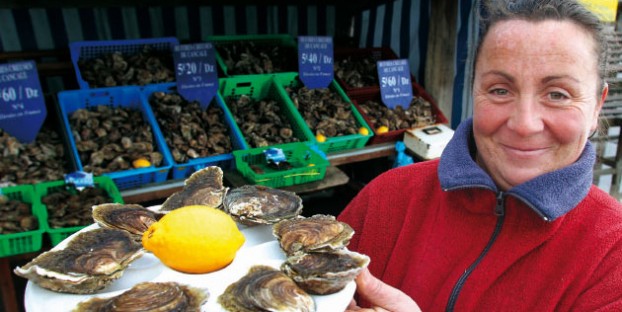 Brittany is the foremost seafood region in France and fresh fish of all kinds greet you wherever you travel. Chris Rundle takes us to the markets and street stalls of Dinard and Cancale, and to the restaurants of Saint Malo to share the best places to enjoy the freshest regional specialities.

Recreate the authentic seafood taste of Brittany with a menu for regional fish soup, croutons and rouille to try at home. 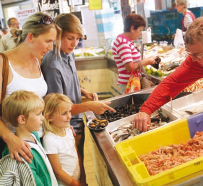 It is just after nine o’clock and already the customers are starting to line up at Yves Riou’s fish counter in the covered market in Dinard. It’s also market day in the town, though outside, the fish sellers who set up twice a week are now looking glumly around in search of customers.

But the locals know precisely where they want to buy: at Chez Françoise, which is why trade is rapidly picking up as a row of faces gaze down on the shimmering display that Yves and his wife Françoise have artfully laid out.

Behind the counter Yves himself is carefully salting fillets of pouting – a member of the cod family – which will be rolled up and gently cooked in a creamy sauce for one of the four or five plats cuisinés he makes every day and sells in addition to fresh fish.

The business has been trading from this site since 1938. Yves and Françoise have been here since 1986 and the enterprise remains a tightly knit family business which has clearly established a reputation for quality.

So is Brittany’s fish the best in France? “Certainly,” says Yves. “Because we have so much choice and because there are lots of day boats – the ones which go out in the morning and come back in the evening, rather than staying away for 10 or 15 days. “There are three based here in Dinard – and they are the ones I mostly buy from.”

The gleaming array on the marble slab is enough to persuade you to buy fish for lunch even if you weren’t planning to. Apart from the monkfish, cod, whiting, St Pierre – also known as John Dory – and the rest there are also homemade terrines and mousses, towering vol-au-vents piled with smoked salmon and, of course, the ubiquitous fish soup.

Too much variety for three boats to provide, surely?

“That’s the great thing about Brittany’s fishing industry – you can get pretty much anything you could ask for,” says Yves.

“If I can’t buy exactly what I want in Dinard then there are other boats going out from St Malo, and others from Lorient, and from the south coast, right down to the Vendée. It’s a fishmonger’s dream.”

It’s 10.30 and a dozen miles away Armell Chaufax pulls the collar of her fleece up around her ears in the teeth of an evil wind that whips round this corner of the quayside in Cancale.

Give a Breton a word association test and throw in ‘Cancale’ and he’ll immediately come up with ‘huîtres.’ The village started to emerge as the oyster capital of the region just over a century ago when the locals switched from harvesting wild oysters to cultivating them, though previous customers had included the Romans, and Louis XIV, who ordered daily deliveries to Versailles.

Some 25,000 tonnes a year are now harvested from the beds at this end of Mont St Michel Bay, where one of the highest tidal ranges in the world sends billions of gallons of nutrient-rich seawater surging in twice a day. No summer visit to Cancale is complete without a saunter and a sampling along the rows of blue-and-white striped oyster stalls which line the quayside.

By mid-December with only the occasional shaft of sunlight piercing the low cloud, Armell – who has sold oysters here for 25 years – is one of only two traders still valiantly manning a stall on bitter mornings. Despite the chill, she knows full well there is business to be done: the French have something of an oyster addiction and the customers will soon start arriving to buy a dozen or more for lunch or supper.

“It’s a completely different scene in summer but we keep going all winter because the demand is still there,” says Armell, ducking back into shelter as a squall sweeps in. “And we’re just coming round to Christmas – and that’s when the trade really takes off.”

It’s 12 o’clock and just coming up to the start of service. Chef Fabrice Goualt’s broad-bladed knife flashes three, four times and another lobster is on its way to a rendezvous with sauce Armoricaine, the Breton speciality based on tomatoes, Cognac, white wine, garlic, cayenne and tarragon.

Outside among the restaurants clustered around the Place Guy la Chambre the air is full of the aromas of forthcoming lunch: of fish sizzling on griddles and in pans, of wine being reduced, onions and garlic frying.

Fabrice’s domain, Restaurant la Duchesse Anne, hunkers under the ramparts of Intra-Muros (literally ‘inside the walls’), the historic centre of St Malo so painstakingly rebuilt after wartime devastation. Inside, massive granite walls keep out the dank December weather. In the cosy, elegant fin-de-siècle dining room, waiting staff move with the speed and grace of whippets.

Chef Fabrice glugs Cognac into a pan and the contents are suddenly engulfed in an inferno as he finishes off one of the restaurant’s three lobster-based specialities. Another is peppered monkfish steak, yet another is marmite (French for pot) Malouine, a subtly flavoured fish stew which is served only on Fridays.

“It’s based on mussel stock and we add pieces of sole, turbot and rouget. It’s a bit like a marmite Dieppoise, only a superior version,” says Fabrice. “It’s been a speciality here for years and we have people coming in every week just to eat it. But it’s like that with a lot of our customers. There are families from all over the world who regularly come to St Malo and for whom eating here is a bit of a ritual. We’re now catering for the third generation: we have customers who were first brought in when they were little and now they’re bringing in their own grandchildren.”

The lobster is carefully transferred to an elegant copper serving dish and dispatched to the first of the lunchtime clients: the entire cooking process has taken just two minutes. 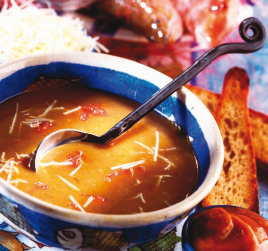 This dish doesn’t require the finest cuts of fish, merely basic white fish plus a few trimmings. Yet for all that it is an immensely tasty, satisfying, warming dish and one whose consumption still involves a bit of ritual.

Fish soup is generally served with croutons, Gruyère cheese – which goes delightfully stringy when added – and rouille, a pungent sauce flavoured with saffron and garlic. The further south you venture the more likely you are to find another accompaniment: one or two whole peeled garlic cloves to rub on your croutons before you float them in the bowl.

Here’s an easy recipe for fish soup – and one for rouille from Marseilles, where the locals, naturally, claim theirs is the best.

Take the soup to table in the pot with the rouille, croutons and some grated Gruyère served separately. Once the soup has been served the usual procedure is to drop some Gruyère into one’s bowl, then spread rouille on a couple of croutons, float them on the top to eat them as they soften.