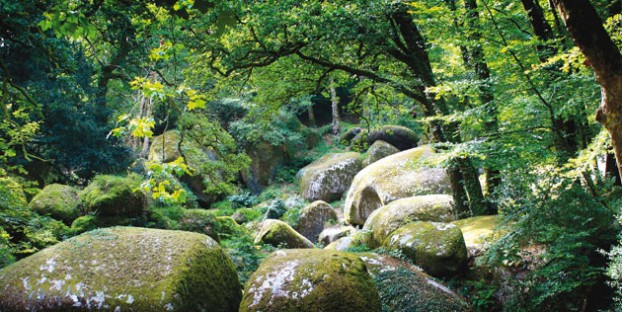 Gillian Thornton’s travels and curiosity took her to Huelgoat – the enchanting gateway to Finistère’s Monts d’Arrée and within easy reach of Roscoff.

Turning down the path beside the solid walls of 14th century Moulin du Chaos, I experienced what I can only describe as a Narnia moment: no snow, no Mr Tumnus, and no White Witch – but a definite sense of entering a very magical place.

The Magic of Brittany

Brittany is rich in myths and legends and the small town of Huelgoat seems to have more than its fair share. This thickly wooded area lies at the western tip of what was once the huge Forest of Brocéliande, legendary home (according to Breton folklore) of Merlin the Magician, and it’s so easy to feel enchanted by Huelgoat’s extraordinary geology and magical forest.

The first challenge is to pronounce the town’s name, which looks daunting but is deceptively simple. Just say every syllable and there you have it – Hu-el-go-at, a combination of two Breton words which mean ‘high forest’, perfectly describing the town’s geographical position.

After parking my car beside the sparkling lake on a sunny afternoon, I followed the sound of Celtic music to Place Aristide Briand, where I found the Tourist Office well stocked with ideas for outdoor activities. But the main draw here is the Chaos – an area of ancient woodland bisected by the River Argent and littered with giant boulders piled at impossible angles. 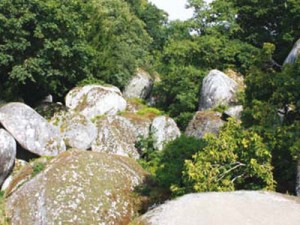 In geological terms, the explanation for such chaos is simple. Liquid rock spewed out from 10 km below ground and on reaching the surface cooled into huge blocks. Centuries of weather and water subsequently permeated the cracks and eroded the softer pieces, leaving massive chunks of hard moss-covered  granite, wedged into valleys and hollows. But to early settlers, such a landscape could only be the work of other powers.

Dotted today with Celtic camps, megaliths and a pre-Roman road, the area in ancient times was a population hotspot and fireside stories soon embedded themselves in the local psyche and the magic was handed down through generations. By the time Huelgoat was established, during the 12th or the 13th century, the legends were ancient history.

From mineral wealth to conservation

Until Brittany united with France in 1532, the Dukes of Brittany kept a garrison here, and at around this period the lake was dug out as a reservoir for the local silver-bearing lead mines. The mines closed in the mid 19th century and Huelgoat lived off granite extraction. But falling demand, coupled with action from concerned residents, ensured that significant areas of this unique forest were protected for the benefit of future generations. 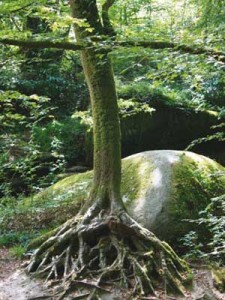 Huelgoat’s economy today is based on tourism – an industry born more than a century ago as English visitors were drawn here by the Arthurian legend. Deep in the forest around Huelgoat, Merlin supposedly guided Arthur to discover a fabulous treasure in the Grotte d’Arthus – an ancient adaptation of the name Arthur. The shady glades and moss-covered boulders also proved irresistible to artists and writers, including Paul Sérusier, friend of painter Paul Gauguin.

Wandering through the Chaos today, you can relive the story of angry Giant Gargantua, who reputedly hurled rocks from the north Brittany coast on to the people of Huelgoat for offending him with their meagre fare – the only food they had. Then there’s the Devil’s Grotto, where the Argent plunges 20 metres over a precipice before disappearing below ground, and the grotto called the Virgin’s Kitchen challenges your imagination to see furniture and utensils hollowed out by centuries of rushing water.

All the paths of the Chaos are colour-coded, the easiest being the 4.5 km orange circuit, which takes in the main sites and includes the Lovers’ Trail, the Mushroom Rock and the curious Trembling Rock. Longer circuits lead to the canal that once served the lead mines, and to the 10th century defensive mound known as Le Camp d’Arthus.

But a note of advice: wear flat shoes and take a sweater as it can be cool beneath the trees even on warm days. Then just keep your eyes open amongst the lush ferns and mossy rocks for birdlife, lizards and all kinds of bizarre tree roots and formations. You might even come across people from another world, as I did – Paris folk harpist Eve Mctelenn and accordion player Laurent – who come here on holiday to play their favourite music in authentic surroundings. 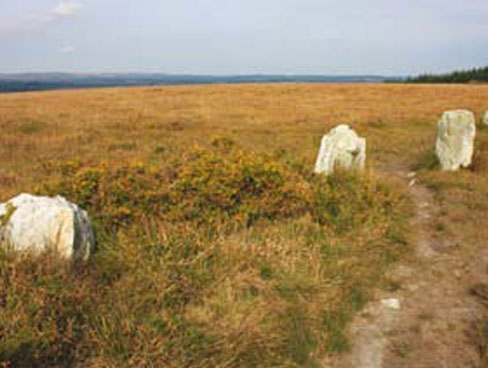 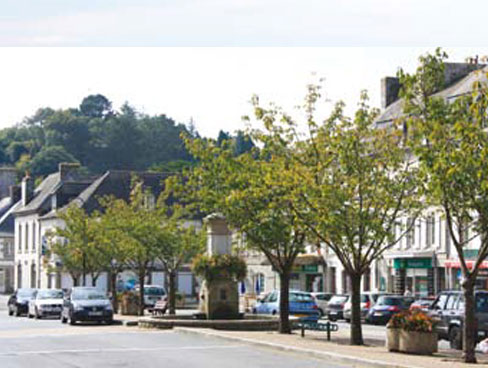 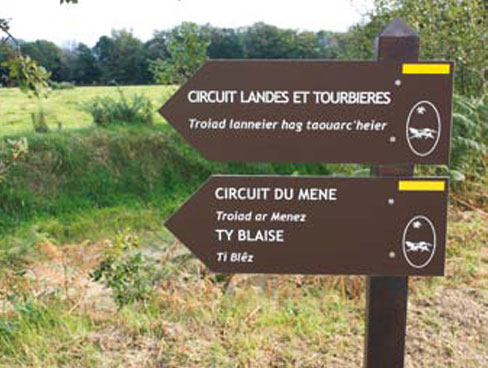 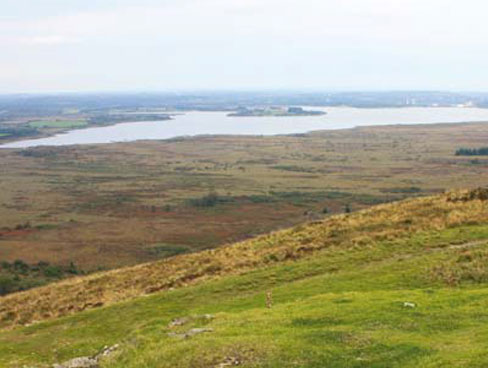 West of Huelgoat lie the Monts d’Arrée, Brittany’s mini mountains, which at just under 400 metres are the region’s highest point. Many Brits rushing south head straight through this undulating area of open moorland, but in doing so miss all the magic that casts its spell on the heather and hilltops. Deer, otters and beavers live undisturbed in a landscape coloured by the seasons. In early summer, the moors are green with new growth. In June, marsh flowers carpet the bogs, and early autumn brings the pinks and purple of heather, the grass fading to white with the onset of winter.

The highest point of the Monts d’Arrée is Mont St Michel de Brasparts, topped by a stone chapel and giving sweeping views over countryside which abounds in legends of spectral figures, devilish dogs and mischievous Breton pixies called Korrigans which at times are helpful but at others play deadly tricks.

Not far from Mont St Michel, the Ferme des Artisans at Brasparts is a must-stop option if you’re looking for authentic local crafts to take home. It was here that I met Yuon, a guide with Addes – a small company, based in nearby Botmeur, which helps to keep the myths and magic of the Monts d’Arrée alive through a series of guided walks.

Heading out through the heather, Yuon led me to a line of Neolithic menhirs nicknamed ‘Les Noces de Pierre’. Of the original line, only ten still stand, reputedly drunken wedding guests, cursed and turned to stone by a Korrigan when they refused to let a priest pass to visit a dying man.

Did I believe Yuon’s tall tale? Well, let’s just say the jury’s still out. After all, in this beguiling land of myth, legend and chaos, you never quite know who’s listening.