Sitting beneath a black and white Breton flag, surrounded by tents and caravans, I could be on a holiday campsite in Finistere or Morbihan. There’s French wine on the picnic table and snatches of French conversation drifting through the warm summer air, but this patch of field, affectionately known as Little Brittany, is a long way from the rugged coastline of western France.

I’m deep in rural Oxfordshire in the backstage sanctum of the annual Cropredy festival, or Fairport’s Cropredy Convention to give the three-day event its full name.

It’s more than 30 years since Dave Pegg, bass guitarist of folk-rock legends Fairport Convention, first helped his home village with live music for their summer fete. What began as a fundraiser for the village hall has now rightly earned itself the label of ‘Britain’s friendliest music festival’.

There’s truly something for everyone in the stellar line-up, the 2013 festival including headliners Alice Cooper, 10CC and Nik Kershaw, as well as contemporary talents such as Scotland’s Peatbog Faeries and London’s Mediaeval Babes. Previous festivals have welcomed household names as varied as Status Quo, Steve Winwood and singer-songwriter Ralph McTell, who has penned some of Fairport’s best-loved tracks.

The Cropredy musical extravaganza opens each year with the ringing of the local church bell, ‘The Festival Bell’, that has given its name to one of Fairport Convention’s best-known albums. On Saturday night, the Fairports bring proceedings to a close, accompanied by assorted international friends who invariably include a strong Breton contingent.

Fairport Convention’s only hit in the UK singles charts was ‘Si Tu Dois Partir’, a French language version of Bob Dylan’s ‘If You Gotta Go’, but the band’s cross-Channel links really began in the mid-’70s when celebrated Breton harpist Alan Stivell invited then Fairport member and folk fiddler extraordinaire Dave Swarbrick to play with him at the Royal Albert Hall.

“The guitarist at that event was Breton musician Dan ArBraz who was so fantastic that we collared him for Fairport, and for six months Dan rented the next cottage to me here in Cropredy,” explains Dave, who now divides his time between homes in Banbury and southern Brittany.

“Dan claims it was me who taught him to speak English – unfortunately with a Brummie accent! When he went back to Brittany we kept in touch, and I’ve played on several of his albums over the years.” 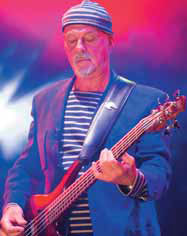 On their first holiday to Brittany, Dave and his family quickly fell in love with the region, not least its musical traditions and the legendary fest-noz atmosphere of the many live music events. With ex-wife Christine, he owned a holiday cottage near Quiberon for 15 years and now spends a large part of the year with his partner Ellen in their traditional Breton long house not far away at Merlevenez.

Dave has made many French friends, despite insisting that his French language skills don’t seem to have improved since day one. Certainly our two companions round the picnic table don’t agree – English-born composer and guitarist James Wood and French rock guitarist Pat O’May.

“We all played on Alan Simon’s Excalibur – three studio albums and two live albums – as well as on Alan’s Anne de Bretagne,” explains Dave, who was also part of the Excalibur live DVD, filmed in the Brocéliande forest. “Fortunately for me, a lot of Breton bands seem to be ‘short’ of a bass player, so I’m always happy to guest at French festivals alongside musicians like Red Cardell and The Churchfitters.”

Brittany buzzes with music events over the summer months, large and small. “After a first wave of popularity in the ’70s, changing fashions in music meant that Breton folk music took a nosedive in the ’80s,” explains Pat O’May. “But a second wave began in the ’90s thanks to young French musicians combining contemporary rock rhythms with traditional tunes.”

An abundance of Celtic festivals

These old Celtic melodies are close to Fairport Convention’s own roots in British folk music. In 1977, the band played the now legendary Festival de Cornouaille in Quimper and they have also performed at the huge Interceltique festival in Lorient.

“We’ve watched the Cornouaille festival grow into a massive celebration of Breton traditions and music,” says Dave. “Like many French festivals, it costs just a few euros to get in and watch dozens of daytime concerts that really show the city off. You just pay a modest extra charge to stay on for the evening performances. Hopefully one day Fairport will get the chance to play there again.

“The atmosphere at these festivals is amazing. I love the fact that so many young people, especially girls, play in traditional Breton bands or bagads, on bagpipes, bombards and drums. I’d love to get a bagad to play here at Cropredy! This year I’m delighted to have James and Pat playing with us, but I’d like to go one stage further and have a Breton-themed day one year, get Dan ArBraz to come back, and really bring Breton music to the British public.” 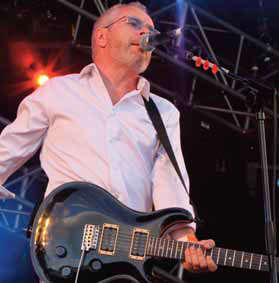 Dave does a grand UK tour with the Fairports in February and May each year, often playing intimate venues which really allow the band to interact with their audience.

Almost 30 people have played with Fairport Convention since they were first formed in 1967 by Simon Nicol and Ashley Hutchings.

Dave joined two years later and the three of them have played with the current line-up for more than 15 years – drummer Gerry Conway, Ric Sanders on violin and Chris Leslie on fiddle and mandolin.

When he’s not working, Dave spends as much time as he can in Merlevenez, where he soon became an integral part of the local community. When he and Ellen first moved to the village, they invited the neighbours to come for an apero at 5pm.

“We put invitations through 12 doors either side of the house and waited to see if anyone would turn up,” he recalls. “At 5pm exactly, the entire village arrived and the party went on until around 3am, at which point we felt the move was probably going to be a success! Now we hold the village fete in our garden every year for about 90 people and the fun carries on as long as I can stay awake.”

Like any good music festival really – on either side of the Channel!