According to the old adage, the best things come in small packages. As Peter Clayton discovered, the island of Tatihou is a case in point.

Tatihou island, off the Contentin Peninsula

At a mere 60 acres in area (or 24 and a bit if you prefer it in hectares), Tatihou hardly sounds like a big shot on the tourism map. In fact, the number of visitors is limited to 500 a day. And it’s not exactly encouraging to learn that the island’s name probably originates from a 9th-century Viking leader called Tat.

Yet this modest green rock off the north-eastern tip of the Cherbourg peninsula, just a few hundred metres or so from the shore at St-Vaast-la-Hougue, has more than its fair share of surprises in store.

For example, it is hardly the sort of place where you’d expect to find a UNESCO World Heritage Site, but it has one – a 17th-century Vauban coastal defence tower. A second such tower, also designated by UNESCO, stands across the water at La Hougue Point close to neighbouring St-Vaast. Both structures are the result in hindsight of the disastrous 1692 Battle of La Hougue, in which the heavily-outnumbered French fleet was defeated by an Anglo-Dutch coalition intent on thwarting Louis XIV’s ambition to take over the English throne. The towers, built in 1699 to strengthen French fortifications in a vulnerable area, are still intact today. 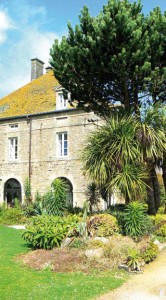 In 1720, tiny Tatihou again rose to prominence with the creation here of a lazaret – a quarantine station – in an attempt to contain the Plague of Marseilles. Immediately on arrival, plague victims and their belongings were fumigated using smoke from burning heather, juniper berries and old leather. The lazaret closed in the 1860s and in 1887 the buildings became a maritime laboratory for scientists from the Natural History Museum in Paris. They studied seaweed, plankton and fish reproduction until, in 1925, the laboratory moved off the island.

Tatihou’s next role, from 1926 until the outbreak of World War Two, was to provide a school of health education for children. Soon after hostilities ceased in 1945, the island then offered hope to wayward teenagers, sent here by courts to be helped by educationalist Camille Belliard, who had settled on Tatihou to cater for young people ‘in difficulties’. This help took the form of building industry training and a strict regime and continued until 1984, after which the island was deserted until 1990.

Neglected and uninhabited, Tatihou soon attracted massive colonies of birdlife. The island was then entrusted to the authorities of the La Manche département, who came up with an ambitious plan to develop it for cultural activities. On 5th June 1992 – the tri-centennial anniversary of the Battle of La Hougue – Tatihou claimed its place on the tourist circuit when it was officially opened as a nature reserve and heritage centre.

Getting to the island today from nearby St-Vaast is an event in itself, in a boat made for the job. Tatihou II seats about 50 passengers and sports an unusual extra feature – wheels. Conventional sailing to the island at high tide takes 10 minutes. 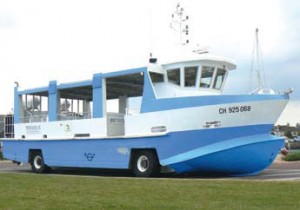 At low tide, the boat rolls effortlessly along a specially-laid causeway running through the area’s 250 hectares of oyster beds.

These produce around 6,500 tons of oysters a year, prized by experts for a distinctive hazelnut flavour – the result, they claim, of the quality of the seawater and local age-old traditional oyster farming practices.

So apart from the large and noisy gatherings of gulls and egrets, what can you expect to find when you disembark at Tatihou?

Guided tour and other attractions

The starting point for guided tours is the old Customs House. Going through the grand gateway brings you into the walled and beautifully-tended sub-tropical gardens – a wonderful and surprising sensation of scents and colours and a spectacle of unusual plants, shrubs and trees from all corners of the world, thriving in Tatihou’s mild climate. Further on is the bird reserve, managed by the Ornithological Group of Normandy, which regularly records up to 150 species of migrant and winter birds on the island. Stated simply, Tatihou is a nature photographer’s paradise. 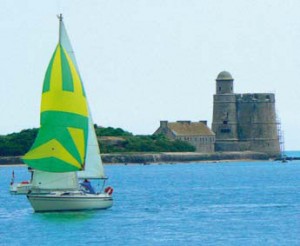 For visitors who come to discover the island’s history and heritage, the attractions include the maritime museum and ship hall, the boat shed, the chapel and the military installations – Vauban tower, powder magazines, barracks and fort.

But as a must-see French island, Tatihou has one more surprise up its sleeve – the annual internationally-acclaimed Les Traversées de Tatihou music festival. For a few days in August, fans of folk music from the world over are thoroughly entertained by a programme based mainly on a nautical theme.

Performances are carefully planned and timed to coincide with the tides so that at low tide festival goers can follow a guide and walk safely through the oyster beds from or to the shore at nearby St-Vaast. The sight of a long procession of lantern-carrying music fans crossing the bay on foot in late evening must be quite an eye-opener for anybodywho happens to be flying over at the time.

Tatihou is open to a maximum of 500 visitors every day from April to September, and at some weekends during winter months. Booking in advance from the quayside office in St-Vaast-la-Hougue (tel: 02 22 23 19 92) is advised. The price includes the return ferry crossing on Tatihou II and entrance to the museum and the Vauban tower. Free guided tours of the island are also available.