All in a Bay’s Walk: Guided Trails around Mont St Michel

Impressive from any angle, Mont St Michel is even more uplifting when seen from the seabed, as Gillian Thornton describes.

If you wind your way up to the hilltop Abbey of Mont St Michel, it’s highly likely that somewhere along its granite ramparts you’ll turn off the bustling, narrow street for a quiet breather. As the tide turns, you can watch the waters of the Channel swirl into the broad bay with surprising speed. But at low tide it’s a different picture altogether – groups of tiny figures criss-crossing the vast open sands on foot, just as pilgrims have done for centuries.

Legend has it that the lofty abbey was founded in 708 after St Michael appeared to the bishop of nearby Avranches in three dreams, fuelling the religious fervour of the Middle Ages. Monastic buildings spread steadily over the summit of the rock as pilgrims flocked to pay homage.

In 1979, the Mount and surrounding bay were the first French destination to be listed as a World Heritage Site by UNESCO, and today Mont St Michel is second only to Paris as France’s most popular tourist attractions.

Whatever your religious beliefs, visiting this iconic Abbey with its high-level cloister and panoramic views is a truly uplifting experience, and not to be missed. Equally memorable is joining one of the many guided groups which strike out across the sands at low tide.

Insights into the local environment and ecology

Don’t even think about going it alone: the warning signs are there for good reason. The tide comes in as fast as a man can walk and those seemingly firm sands are dotted with pockets of treacherous quicksand – easily spotted by experienced guides but all too easily missed by an untrained eye.

As well as guaranteeing your personal safety, being part of a guided walk gives you a fascinating insight into the complex ecosystem of the bay. Tucked in the angle between the coastline of Normandy and Brittany, the Mount itself belongs officially to the Norman departement of Manche, although most Bretons argue a strong case for ownership.

A choice of guided walks

After sailing overnight from Portsmouth, I arrived in St Malo in good time to reach Mont St Michel for a mid-morning excursion with Chemins de la Baie, one of several companies offering walks led by qualified guides.

You can choose from a variety of routes, with or without commentary in French (and a few in English), not that you need to hear any words to feel humbled by the awesome vista of sand, sea and sky. Departure times are ruled by the tides and the annual timetable is shown on their website.

I opted for Le Chemin du Marquis – a 7km circular trail from the car park at Mont St Michel to the uninhabited island of Tomberlaine and back. It takes 3 hours 30 minutes and costs just €9 for adults and €5 for children aged 6-12. Younger kids must be carried in a backpack.

Other walks depart from various points around the shore and offer choices such as a full or half crossing of the bay, a stopover on the Mount, and sunset excursions in summer.

Preparing for summer and winter trails

Walks set off in all weathers, so make sure you have enough clothing available to be well prepared for any eventuality.

Between November and March, wear warm windproof clothing and long waterproof boots (wellies and walking socks are ideal). From April to October the dress code is shorts and bare feet. My advice is to take a light rucksack for spare layers.

I set out in April sunshine but the clouds rolled in quickly to give a dappled, breezy morning, making me glad of a fleece jumper and light coat over my T-shirt. But my bare legs and feet remained surprisingly warm – no doubt energised by the effort involved.

We were told that walking on sand is equivalent to covering twice the distance with shoes, and my feet and ankles soon knew they were having a workout. So if you tend to suffer problems with feet or knees, a bay walk is probably not for you – not that this will lessen the pleasure of taking in the wonderful view of the bay from the Abbey. 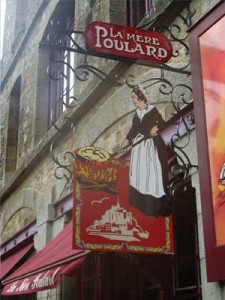 Carole, our guide, gave us a few basic safety warnings before leading us out of the car park and beside a water channel which is filled twice daily by the tide – an area of squelchy sand mixed with slippery clay.

Once through the water we picked our way to higher ground. Here, flocks of sheep grazed clumps of samphire that are covered by the high spring tides. Pré salé lamb raised on these salt pastures is delicious, so give your taste buds a treat.

Skirting the eastern side of the Mount, we scrambled down from sheep country on to firm sands moulded into ripples by the movement of the tides. Every few yards changed our perspective of the abbey – not only the angle of view, but also the ever-changing patterns of light and cloud.

The Bay of Mont St Michel has the second highest tides in the world after Canada’s Bay of Fundy, and Carole stopped periodically to draw diagrams in the sand and explain the tides and the variety of marine plants and creatures inhabiting the shoreline.

The most dramatic lesson of all was our introduction to quicksand – graphically illustrated by Carole sinking herself up to the knees in a seemingly innocent pool of shallow water. The more she wriggled her feet the deeper she went, until her feet reached subterranean rock bottom. But how to get out?

The exit demonstration was equally compelling. First, she made circular movements with one leg to break the hold of the killer sand, then knelt on the safe sand beside the pool with the freed leg whilst repeating the operation with the other. It worked a treat but wasn’t something I’d want to attempt with the tide lapping at my kneecaps.

Having tested the limits of this particular patch, Carole invited us to experience quicksand for ourselves – and nobody declined.

A little tip though: before you try it, hand your photo equipment to someone on solid ground. One camera-carrying gentleman pulled his leg out of the gloop rather quicker than he expected to and almost fell flat.

As the island of Tomberlaine loomed larger in front of us, we splashed through the shallows, the water warmed by the spring sunshine. A guide passing us in the opposite direction had to reprimand two teenagers in his group for hanging back and wandering too far out. The water may look inviting but you can’t be too careful.

By the time we reached Tomberlaine we had a good view of the back of the Mount – a steep cliff covered in trees which is hidden from the public causeway. Under the heat of the sun the Mount’s granite houses glowed pink, morphing to brown as the clouds blew over again. Tomberlaine itself was once home to another monastic community and later to a garrison, but the buildings were destroyed in the 17th century under Louis XIV, and today it’s a protected site for nesting seabirds.

From the island we retraced our steps to follow the same route, but as the light continued to play on the water and the shadows shifted on sand I felt that I was seeing the panorama for the first time. Hence the reason why each day’s walk is different from the last. The brochure description may sound the same, but weather and water will dictate exactly which invisible path the guides and you will tread. And whilst the benefits of blue skies and sunshine are obvious, there are many visitors (and locals) who love the wild, back-to-nature atmosphere of a mid-winter day.

Nothing stands still in the bay for long. Some changes are subtle but others more obvious. For example, the roadway leading to the Mount has caused sand to pile up around the granite hill, necessitating a major engineering project to restore the rock’s island status.

A dam at the mainland end of the causeway is helping to wash incoming sand back out to sea again by trapping water at high tide and releasing it back into deep channels at low tide. In 2012 the public roadway is closed. A causeway is being installed, supported on stilts to allow water to pass beneath it. Visitors park on the mainland and either walk to the Mount or catch the shuttle bus.

This approach may be new – but the sight of that iconic hilltop Abbey risig from the seascape is timeless. And what better way to enjoy it than to follow in the footsteps of those medieval pilgrims?