Holiday France Direct advertisers Michael and Francoise Bruce-Mitford are true pioneers in the holiday rental market having led the way in offering holidays that allow Britons to holiday in rural France immersed in the local culture. The idea of renting a property in the French countryside as a base to explore the markets, restaurants and attractions of the area, and travelling without tour guides, planned excursions or any of the “package holiday” trappings is a familiar concept today, but just forty years ago this type of holiday was barely heard of.

In the early 1970s Michael and Francoise found themselves with a young family and limited income from Michael’s job as a freelance film technician.

Having met Francoise in her native France when she visited a youth hostel where he was working, they had soon married and were living in Slough near Pinewood Studios in a terraced house with their two small children. Money was tight and a chance visit from a friend returning from holiday sparked a business idea that would change all their fortunes.

“A friend of ours popped in on his way back from a holiday in France”, says Michael. “He had stayed in some ramshackle rural place and had a wonderful time. The idea of this type of holiday was thought of as very eccentric and odd but he suggested that there might be more ‘eccentric’ types like him that would like to experience the real France on holiday rather than just the tourist attractions and hotels”.

Francoise and Michael discussed the idea and decided to give the project a go launching their company VFB Holidays. They invested in lineage adverts on the back page of  The Times offering rural French holiday rentals and soon enquiries started coming in.

In the first year they made around 100 bookings, and with Michael still working in the film industry by day it was a hectic time. “It was very exciting, very busy, I’m amazed it all went off so well!” Michael comments. “We were renting out holiday homes unseen as we had no time to visit and vet them, but our customers were happy and the next year we made 400 bookings and I had to consider making this a full time job”.

A new way to holiday becomes a new way of life

In the third year of trading Michael gave up his day job to concentrate on the holiday rental business, taking a night shift in a Mars factory to keep a steady income for his family. The business grew to 600 bookings that year and was finally profitable and stable enough to support the family and even employ a part time member of staff.

“What you must remember is that this was a postal business,” says Michael. “We did all our business on paper, there was no internet of course and the paperwork was quite a task”.

The indomitable Mrs Pope was hired to help out, working in the makeshift office in the lean-to conservatory tacked on to their tiny house until the growing success of the business prompted a move to Cheltenham.

It’s clear that innovative thinking and a lot of extremely hard work made VFB holidays such a success, but the Bruce-Mitfords remain modest. “We had no real experience, everything was rather haphazard and piecemeal, we were just lucky enough to be in the right place at the right time!”

VFB holidays shaped the way people holiday in France today and the marketplace quickly grew as many other holiday rental companies joined them.

By 1980 VFB holidays had exclusive contracts with over 400 properties across France from Brittany to the Pyrenees.

Going from strength to strength the company added small rural hotels, escorted tours, canal holidays and skiing trips to its portfolio and in the year 2000 over 30,000 tourists holidayed through VFB.

The Bruce-Mitfords are no longer involved with the VFB brand (which is now part of Travelzest plc) but they keep in touch with the 50 employees and friends who worked with them at the company, organising regular reunions including a 40th anniversary party last year. 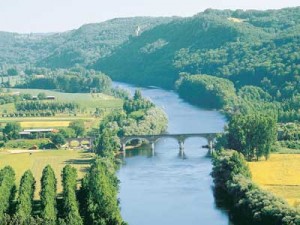 Michael and Francoise are still involved in tourism even in their retirement with two holiday properties in France and a boutique spa hotel in Marrakesh, Morocco. The French properties include a house in Normandy that was previously owned by Francoise’s grandmother and ‘La Pomerade’ a larger house in the Dordogne that they designed and built in the 1980s.

“We bought the land on a whim really, a friend wanted to sell it to get some money for his daughter’s wedding and persuaded us to take it off his hands”. The plot had a unique view over the river valley below and seemed an ideal site for a holiday property.

Building the house from scratch was not without its problems. Even with Francoise knowing the French ways of doing things there were issues to overcome. The couple treated the project as a hobby and had fun choosing the most modern facilities the 1980s had to offer including a central pipe outlet vacuuming system with sockets in each room, air circulation technology and an outdoor swimming pool. Despite having such a personal interest in its design, the family had little time to spend there and it remained a successful holiday let with visiting guests for up to 30 weeks of the year. 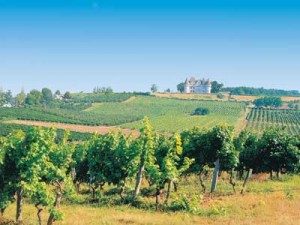 In 2008 Francoise and Michael decided to refurbish the property with new bathrooms, interior decoration and a modern fireplace.

“It really is a wonderful place to visit,” says Michael “I think it’s so silly when families say they don’t want to holiday in the Dordogne as the sea is too far away! After all the River Lot is just as much fun for children, it’s shallow and clean, perfect for swimming and canoeing and there are even has manmade beaches along it!”

Michael is also passionate about the history and architecture in the region “I love that you can see the influence of the English in the fortified bastion villages and castles built during the hundred years war when the Dordogne was the border between France and England” he says. The beautifully preserved Beynac Castle dating from 1250 and the Chateau Hautefort with its exceptional formal gardens are particular favourites to visit.

The twice-weekly market in the nearest village is also not to be missed with regional specialities including local honey and exceptional locally grown produce.

The Bruce-Mitfords have travelled all over France but the Dordogne has always had a special place in their hearts “We have so many lovely friends there” they say. “The area has such a feel good factor for us, it’s very special. As I understand it there are more holiday homes owned by Brits here than almost any other region of France so it’s not only us that feel this way”.

A lifetime of living (and sharing) the dream

With a main residence in England, Francoise and Michael are hoping to spend much more time in the Dordogne in the coming years, enjoying exactly the type of holidays they first promoted and advertised at the start of their tourism career.

And perhaps that is one of the reasons for their success? They love rural France and deciding to share the experience with a generation of holidaymakers seemed only natural.