Ron Toft talked to the woman so inspired by horticultural excellence across the Channel that she set up a successful tour business, French Gardens Today. 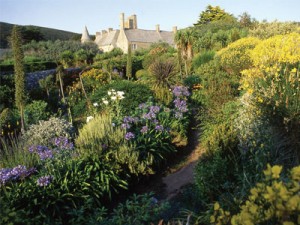 Clare Whately relishes the challenge of finding interesting places and then promoting and showing them to visitors. After ‘discovering’ the gardens of 17th-century Chateau de Bosmelet in Auffay, Normandy, in 2005 (winner of a Chelsea Flower Show gold medal five years earlier), she decided to help put this horticultural gem on the tourist map.

“I met the Frenchman who owned the chateau, and who had been brought up in England,and he complained that not a single person from our side of the Channel had visited his gardens despite his Chelsea success. I was very impressed with his gardens and was convinced I could do something to put this situation right.”

Baron Robert de Bosmelet subsequently took Clare to see a dozen other outstanding gardens in Normandy. Fired up, she selected six, created French Gardens Today, and began running tours to them. She also contacted Robin Lane Fox, gardening columnist for the Financial Times, and invited him to see some of these French gardens for himself.

He thought Chateau de Bosmelet’s gardens were wonderful and his article in the FT inspired many other gardening writers to flock to Le Jardin Plume. What really pleased me was that in 2008 it was the first winner of the Garden of the Year Award presented by the Garden Museum and ‘Gardens Illustrated’ magazine.

Five years after launching her innovative business, Clare is busier than ever showing the delights of some of the best privately owned gardens in northern France to English garden lovers. “Big public gardens are simply wonderful, but you can’t replicate them at home,” says Clare. “The beauty of the gardens I take people to see is that they are owned by private individuals who are passionate about what they have created and maintain.”

“Every garden has a very singular atmosphere and feeling. And on my tours, visitors get to meet and talk with the owners face to face – a personal touch that makes all the difference to people’s enjoyment of their visit.”

A two-day, three-night tour typically takes in two or three gardens a day, each trip rounded off with a drinks party to which the garden owners are also invited.

Autumn is an especially good time to visit French gardens. “They are lovely in spring and early summer, but August is often a very dry, hot period when most French people go on holiday. In September, however, they are back and gardening with a vengeance.”

So of the many French gardens which Clare has had the pleasure to see, which does she particularly recommend to readers?

Where: Saint-Gabriel-Brecy (west of Caen)
Described as “a French peasant cloaked in Italian finery.” Monsieur Didier Wirth and his wife planned their formal garden to complement the architecture of their chateau. “Four terraces, each with its own garden, rise from the parterre behind the house to the gate on the horizon. Every detail of the design and planting – all the perspectives and slopes – have been planned to make the most of this remarkable space.”

Where: Vauville (Cherbourg)
Guillaume and Cléophée Pellerin “enthusiastically continue to develop this extraordinary garden” and its collection of southern hemisphere plants started by Guillaume’s parents in 1947. Gunnera, eleagnus and dramatic forests of Chusan palms act as windbreaks, evergreens giving “a modern and tropical feel”.

Where: Urville-Nacqueville (Cherbourg)
Owners and residents Comte and Comtesse Thierry d’Harcourt inherited the chateau, “captivated in turn by the views to the sea and the sensational position beside the lakes, fed by the springs of the adjoining hills. “The maritime setting and peaty soil suit many varieties of rhododendrons, azaleas, camellias, magnolia and semi-tropical plants.”

Where: Saussey (Cherbourg)
Madame Caroline Lecardonnel arrived at this 17th century manor house as a non-gardening novelist and wordsmith, “but was inspired to match the beauty of her home with a garden.” 20 years later, the award-winning garden represents her “terrific” achievement.

Where: Auffay (east of Caen)
Generations of the de Bosmelet family have contributed to the marvellous gardens and parkland surrounding this attractive 17th century chateau. Hundreds of vegetable varieties flourish within the ancient walled garden, and there is an avenue of 300 year old lime trees.

Where: Montmain (east of Caen)
The Lebellegard family began planting their “glorious and romantic” garden around their 17th century manor house nearly 20 years ago, and Madame Lebellegard’s “passion and commitment are evident from the moment you meet her.” Beyond the lawns in front of the house, the atmosphere is intimate and enclosed, paths meandering through the rose garden and carefully placed seats inviting calm contemplation and enjoyment of the scents and colours.

Where: Castillon (west of Caen)
English-speaking Monsieur and Madame Hubert Sainte-Beuve established a nursery here in 1975 and about ten years later opened “their beautiful garden” – described by The Royal Horticultural Society as outstandingly creative and beautifully kept. “It consists of a series of rooms usually containing pools, based on Japanese and English styles. Its three terraces are separated by yew topiary and lead to fine borders of ornamental grasses, a small arboretum and a maze.”

Where: Auzouville sur Ry (east of Caen)
Patrick and Sylvie Quibel have created “what is recognised as one of Europe’s most significant contemporary gardens” – in 2008, winner of the first Garden of the Year Award from the Garden Museum and ‘Gardens Illustrated’ magazine. “The box, beech and hornbeam hedges provide the framework for luxuriant plantings, often in strikingly bright colours.”

Where: Tourville sur Arques (east of Caen)
Has a “splendid” beech grove to the north and a line of lime trees to the south. The large, walled kitchen garden is laid out in brightly coloured enclosed beds, vegetables alternating with flowers. More than 80 varieties of clematis decorate the brick walls.

Where: Tredarzec (St Malo)
The lifetime dream of Prince Peter Wolkonsky, who died in 1997. “His vision involved terracing the valley, channelling the streams into a sequence of lakes and pools, and creating shell-lined pavilions, grottoes and pergola, as well as formal gardens, steps and meadows.” Since his death, his daughter Isabelle and husband Timothy Vaughan have breathed new life into Kerdalo.

Five years ago, the privately-owned gardens of northern France were almost totally unknown in the UK. Now, thanks largely to Clare Whately, they are receiving the recognition and public acclaim they so richly deserve.