Rennes, Capital in Every Sense

Ted Bruning roams through the history and rich appeal of the rewarding city of Rennes.

Rennes is a city of endless diversions. The Breton capital, in administrative terms at least, has a long and distinguished history. It goes back to Roman times, and it was a capital then too – the chief city of the Redones. And they were no barbarians, the Redones: long before Julius Caesar brought them civilisation at the point of a sword they were issuing good quality coinage based on Greek models. One depicts a chariot being drawn by a horse with a human head, so as well as being civilised maybe they were just a little bit bonkers too.

Not much is left of Roman Rennes – a short stretch of the 3rd century city wall is just about it. But it was a wall that did the business: as Rome collapsed, Rennes held off successive waves of invading barbarians including the Visigoths and the Franks. The Franks captured the whole of eastern Brittany in the end, including Rennes; but the Bretons are a tough lot and in the 9th century took it all back again.

For the next 600 years Rennes was the capital of a duchy that to all intents and purposes was independent. It maintained its freedom thanks partly to the fighting quality of its people (Bertrand du Guesclin, the French general most responsible for defeating England in the 100 Years’ War, was Breton) and partly to some nifty diplomacy which involved changing sides when it suited them. Rennes was besieged by the English in 1357 and the French in 1491, but didn’t fall.

All this came to an end in the 16th century when Duchess Anne of Brittany married Charles VIII of France. But the change of status from national to provincial capital did nothing to diminish the city’s wealth and importance; rather the opposite, if anything. Magnificent private mansions and municipal buildings sprang up in its streets and squares; and after a major fire in 1720 swept away much of the crowded and narrow medieval city centre and destroyed 900 houses, the area was rebuilt along elegant classical lines with broad, straight avenues and grandiose public spaces.

But like Edinburgh,Cardiff and Belfast, Rennes has always been more than just a provincial capital: it is also the chief city of a people who regard themselves as a nation with its own history, its own culture and its own language. Breton pride makes Rennes, more than any other city in France, a rival to Paris– a rivalry you will find reflected in the atmosphere here.

Although Rennes’s population is only some 250,000, it’s incredibly varied and cosmopolitan – partly due to the fact that more than a fifth of its inhabitants are students, drawn to its two universities from all over France and, indeed, beyond. Their presence during term time brings a vibrant buzz to a city that might otherwise be rather staid; the rue St Michel is so lined with student bars that is has acquired the nickname rue de la Soif!

A tour of any French city starts with the market – and in this case, Rennes really does rival Paris: its indoor market, Les Halles Martinot in the place des Lices in the Old Town, opened in 1871 and is the second biggest in the country. The place itself also fills up with stalls on market days, and is surrounded by some of the city’s most historic buildings, many of them mementoes of its martial past. There is the little stretch of Roman wall itself, in Rue de la Monnaie; and in the same street are the last surviving gates in the medieval wall.

The Portes Mordelaises were the ceremonial gates used by visiting dignitaries as well as the Breton dukes and bishops. Ceremonial they may have been, but they still look pretty imposing. Also nearby is the last surviving tower in the medieval defences, the Tour Jehan Duchesne, and a stretch of medieval rampart. 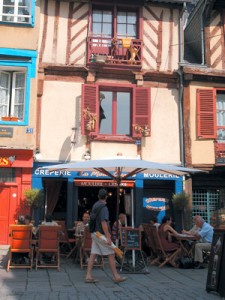 The Place des Lices, Rue de la Monnaie, and the adjoining Carrefour de la Cathédrale with the knot of winding little streets surrounding it are where you will find most of the city’s remaining half-timbered houses, dating in many cases from the 16th century.

Rennes was once surrounded by forests, and timber was the principal building material – which is probably why the fire of 1720 took such a thorough hold.

But Breton half-timbering is unlike the familiar English version: for one thing, they seem to have used better-seasoned baulks, so their timber frames don’t lean and sag in the picturesque but sometimes alarming fashion that ours do; and for another, while we have generally opted to paint our timbers black, theirs are more often a reddish ochre. However the oldest house in Rennes, in the Rue de la Psalette just behind the 18th century baroque Cathédrale St Pierre, is reassuringly wonky!

In the Rue St Guillaume, just round the corner, you’ll find another half-timbered medieval landmark, the Maison du Guesclin. It’s not Bertrand’s actual house (he died in 1380) but a nightclub.

A hundred metres east and you’re out of the old town. Here is the grand Place de la Mairie, where the town hall faces the bow-fronted théatre with its classical rotunda. The law courts in the Place du Parlement were built in the 17th century with an Italianate façade by Salomon de Brosse, architect of the Palais de Luxembourg in Paris.

The interior décor is suitably sumptuous – and, astonishingly, almost brand new. The building was more or less gutted by fire in 1990, but such is its iconic status to Bretons (it’s still known as the Parlement de Bretagne) that it was meticulously restored in a programme of work that took ten years. This included recreating work by Charles Errard, Louis XIV’s court decorator, who had used it as a practice-piece while preparing his greatest oeuvre – the Palace of Versailles itself. 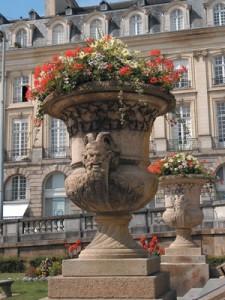 The city centre isn’t all quaint half-timbering and neo-classical grandeur, though: here and there, connoisseurs will also spot Art Deco gems such as the Hotel Mercure, originally a newspaper office, and the municipal baths.

Heading south from the Place de la Mairie you cross the River Vilaine, although you wouldn’t guess it; the river was largely canalised when the city centre was rebuilt. But where it reappears, on the Quai Emile Zola, you’ll find one of the city’s chief glories. The Musée des Beaux Arts is not a particularly attractive building, but its contents…wow!

The collection is based on the bequest of a local worthy named Christophe Paul Robien, who died in 1756 leaving a treasure trove of early Italian paintings and drawings by Da Vinci, Botticelli, Donatello and Dürer. Rubens’ glorious Tiger Hunt is one of the star exhibits from the Robien bequest; but you’ll also find much more recent masterpieces from the likes of Corot, Gauguin and Sisley.

When you’ve digested enough of this fine art, head south again down the Rue Maréchal Joffre to the Place Charles de Gaulle and the remarkable modernist Les Champs Libres by Breton architect Christian de Portzamparc. Described as a cultural centre, it houses the Museum of Brittany, a six-storey library, and a huge exhibition space devoted to science.

By now you’re likely to be feeling peckish. You could just return to Les Halles and fill a shopping bag with cold meats, pain rustique, local cheese and cidre bouché, and find somewhere nice such as the Place de Palais for a little picnic. But like any self-respecting French city, Rennes is packed with restaurants big and small, expensive and cheap (although not as cheap as formerly), where you can try Breton fare such as crêpes, galettes, seafood – or go right up the gastronomic scale to gourmet heaven. If you’re eating regional food and kouign-amann is on the dessert menu, order it! It’s a gloriously, sinfully rich concoction of risen dough and salted butter. It sounds unlikely – but I promise, once tried never forgotten.

To the French and to British visitors alike, Brittany is one of the most popular tourist regions in France– yet Rennes is under-rated. So if you’re in the region, make time to see the capital. There’s much more here than you can squeeze into a day, and a long weekend at least in this elegant, cultured and surprisingly varied city is bound to be a richly rewarding experience.

2 thoughts on “Rennes, Capital in Every Sense”