A pleasant coastal location on the north-eastern tip of the Cherbourg peninsula, not far from Barfleur, St-Vaast-la-Hougue is something between a village and a town – and it’s full of surprises.

The fact that it has a harbour isn’t of course one of them, although fishing is still viable and in the sheltered waters of the bay are extensive mussel and oyster beds – some of the oldest in Normandy.

On the other hand, take St-Vaast’s celebrations of its maritime connections – la fête de la mer (festival of the sea). A colourful spectacle in which the whole community participates, decking the town and its boats with thousands of paper flowers, this takes place not annually as you’d expect but once every ten years. The last festival was in 2010 and the next is not until 2020.

Then there’s l’épicerie Gosselin, known by English expats as the ‘Harrods of the North’ and by the many Parisians who holiday here as ‘le Fauchon du Cotentin’. In reality it’s what you’d probably describe as a traditional grocer’s or general store – a business founded in 1889 and still run by the same family.

Old-fashioned virtues such as quality and service are still very much the order of the day – they will even deliver to your boat! And the sheer choice on offer – chocolates from Maxim’s, a retro-styled tin or tray, organic soap from Provence, fish soup or freshly ground coffee, wines (and tastings) and spirits, and so the list goes on – makes it all but impossible to leave the shop without parting with a Euro or two. 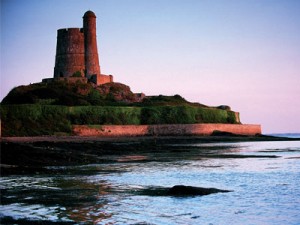 St-Vaast’s next surprise? Its very own UNESCO monument – the Vauban Towers, listed in 2008 as a World Heritage Site.

The twin towers, one on the small nearby island of Tatihou and the other on the La Hougue promontory, were built to fend off invaders of a previous age who also found this spot very inviting.

Vauban’s life work was to reinforce the defences of France’s borders and he created a lasting legacy. Of the 12 groups of fortified buildings and sites Vauban designed to protect France’s borders, the St.Vaast/Tatihou towers are the closest to Britain.

Then there’s l’Hôtel Les Fuchsias, just a 5-minute walk from the harbour. This boutique hotel’s forte is its delicious food – dream fish dishes and wonderful Norman apple desserts and local cheeses. Also on the menu are cookery courses so that you can create some of these gourmet delights with your own fair hands.

Definitely something of a foodie’s paradise, this small town has much more to show you. Any of the small streets from the harbour will reveal delightful fishermens cottages, many displaying tubs of pink and red geraniums at the front, suggestive of peaceful, sun-trapped gardens behind. The street names reflect either traditional crafts, such as rue de la Corderie (rope making), des Chantiers (shipbuilding), des Scieries (sawmills) or family names of the like of Triquet (seamen for seven generations) and Gautier, which goes back to the Middle Ages.

And another surprise? La promenade de Bridport – in recognition of St-Vaast’s twinning with the Dorset town in 1979.

Even more intriguing for its name is the chemin du Tue-Vaques – a path which ran alongside the railway link between Barfleur and St-Vaast. Cows frequently wandered on to the line, with inevitable and fatal consequences. Now a greenway, the path is one of the 230 km of traffic-free voies vertes in La Manche which provide the perfect means to explore the countryside on foot or by bike.

Other St-Vaast attractions include the annual literary festival, the nearby beaches and the 4-day music festival on Tatihou. Strolls around the headland or a short boat trip to the island bring you close to an amazing variety of birdlife, as this coastline is a staging post for migrating birds and home to many species of gull.

St-Vaast is also an excellent base from which to explore this part of Normandy, such as nearby Utah Beach and Ste-Mère-Eglise and, not far away, Mont St Michel and its magnificent abbey and bay.

And the best surprise of all? It’s within easy driving time and distance of the Brittany Ferries’ terminal at Cherbourg.