Last of the Onion Johnnies

Chris Rundle met the French door-to-door salesman who for many years was a familiar face in England as the man who really knew his onions.

The ageing process – and years of hard work – had taken their toll on his fingers but they were still nimble enough as they performed the familiar movements. Francois Keriven was doing what he still did for an hour or so most days: knotting and binding the strings of onions he sells from the garage of his Roscoff home to locals or holidaymakers.

He was performing the task of forming the onions into their familiar tresses with ridiculous ease –  hardly surprising, since it’s an art he mastered more than 60 years ago.

For most of his working life Francois tramped the streets of English towns and cities hawking the strings – one of the iconic symbols of France– from door to door. Now, at 85, he’s one of the last survivors of the army of ‘Onion Johnnies’ who were once such a familiar – and welcome – sight on the doorstep. 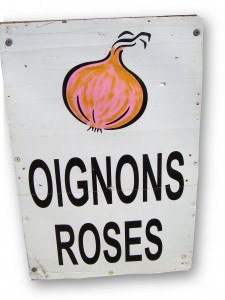 What they sold were the famous Roscoff onions, a distinctive, pink-fleshed variety native to the Finistère region and prized by chefs for their sweet, mild flavour. Raymond Blanc insists that they make the finest of all French onion soups. Their cultivation has been a cornerstone of the rural economy in this area of Brittany for hundreds of years: one of Francois Keriven’s predecessors is immortalised as a gargoyle on the front wall of a 16th-century house in Roscoff’s Place Lacaze Duthiers.

But it wasn’t until 1828 that local farmer Henri Ollivier decided to cross the Channel to introduce the English to the delights of the Oignon Rose. He found a ready market and by the end of the century the trade involved hundreds of sellers. But, with Channel crossings still made in small open cargo boats, it was often a perilous occupation. And there was tragedy too. In November 1905 the lives of 73 Onion Johnnies were among the 127 lost when the passenger ship Hilda, carrying them home from Southampton, ran on to rocks off St Malo in a snowstorm.

A burgeoning market in Britain…

But even that was no deterrent to the trade’s growth. By 1929 the British were buying more than 9,000 tons of onions from around 1,400 sellers. Come the 1930s, when Francois’s father was following his own father into the business, that number had risen to 2,000 – more, said Francois, than the market could bear.

“There was too much competition,” he told me. “Too many sellers. My father would go to a house and knock on the door and ask if they wanted to buy onions and they’d often say, ‘No, someone’s already been – and we had four call yesterday.’ But you just had to keep on knocking to do the sales. “There were young sellers who came back to the depot in the evening with their onion strings and they hadn’t sold one. The boss would go mad and shout at them, but it wasn’t their fault.”

Post-war resurgence for the onion trade 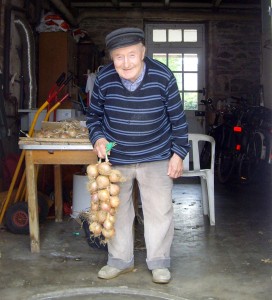 In the late 1940s the reappearance of the Onion Johnnies from Roscoff was one of the signs that life post-war was returning to normal – and particularly welcome since onions generally had been so hard to come by during the years of conflict. That romantic figure with strings of onions carried from a pole or draped artfully on a bicycle was once again a familiar part of the British street scene – though in reality there was very little romance about the business at all.

Onions were shipped over in small cargo vessels to Plymouth or Portsmouth, the sellers accompanying them. Once Francois spent 74 hours at sea, crossing from Roscoff to Grimsby to do his rounds of the north-eastern counties. At the docks, lorries were loaded with 15 tons of onions at a time and taken to whichever warehouse or lock-up the sellers had rented as a base for that year. Then would come the  laborious and tedious job of stringing the onions – and the ceaseless trudging the streets selling them.

Life abroad in England for the Onion Johnnies

And before the advent of Brittany Ferries (originally established to export fresh farm produce from western France to markets in the West Country), England became the temporary home of the French Onion Johnnies for half the year.

“Brittany Ferries were only running for the last 13 years or so of my working life but before that there was no ferry, so we simply stayed in England,” Francois explained. “And ‘home’ was spartan accommodation at the onion depot – often no more than a bed, sink and small kitchen area. It was a hard life, but we were always pretty happy.” To prove the point he directed my attention to the photo album he’d retrieved from a drawer in the sitting room.

“Look – here I am in a pub. Oh, I loved the pubs. Not that we ever got drunk, because there wasn’t the money and there was always work to be done. And we never went for a drink at mid-day either because that would have made working in the afternoon even harder. But we would go in for one or two pints in the evening, before we ate. “I loved that part of the country. I started going there in 1948 and after that I never missed a year until I retired. I got to know people – and they would ask us in for Christmas. I managed to learn English – which I hadn’t been taught. Here’s one of me in Darlington. Look – I’m not wearing a hat. But later I bought a beret because I realised you had to look the part.

“Every year we’d go across and start again and, you know, carrying that batonnet loaded up with onions seemed such hard work initially. And it was heavy: it would rub your shoulder raw and make it bleed. But after a couple of days I got used to it and didn’t think anything else of it.” 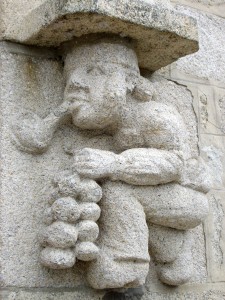 Francois still strings onions in the garage most days and can barely keep up with demand because Roscoff onions, accorded Appellation d’Origine Controlée status by the EC in 2009, have never been more popular. A few streets away from his home, Roscoff even has its own museum dedicated to the thousands of Johnnies who made the annual pilgrimage to sell Brittany’s most famous export.

Today, the trade is little more than a memory. Many of the last generation of door-to-door sellers have died. Francois still keeps in touch with two of his former colleagues, both in nursing homes, and while around 15 sellers were still reckoned to be maintaining a vestigial trade at the beginning of the century, Francois doubts whether any are still at it. “Times have changed. It’s easier to get to England but the expense of travel, and finding somewhere to stay – it’s just not worth it. Money is tight. Nobody can do business in a small way and make a living, like we used to. “I think we were the last generation of sellers – we had the best of it. I certainly can’t see anyone trying to make a go of it today.”

The sellers are gone, but the Maison des Johnnies et de l’Oignon de Roscoff is at 48, rue Brizeux (near the station), and you can take a guided tour. 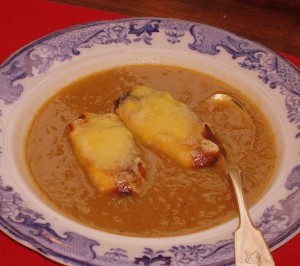 One of the classic soups of France and one of the easiest – and cheapest – to make. Best made using pink Roscoff onions but you can substitute Spanish onions. Allow plenty of time for the onions to caramelise to give the soup its rich, complex flavour.

1.
Sprinkle the flour on to a baking sheet and bake in the centre of a medium oven for 9-10 minutes or until lightly browned.

2.
Allow to cool slightly then add the salt and pepper.

3.
Place the white wine in a small pan and boil for a few seconds to drive off the alcohol.

5.
Melt the butter in a large, heavy pan, add the onions and cook over a high heat for 4-5 minutes until they begin to colour.

6.
Reduce the heat and cook for a further 25 minutes, stirring occasionally to prevent sticking, until they are deep brown.

7.
Away from the heat stir in the seasoned flour and whisk in the wine and the water.

8.
Simmer for a further 10 minutes, checking the seasoning, and serve. For an authentic twist cut thin slices of bread from a baguette, toast lightly and top each one with a little grated Gruyere. Place two slices in each bowl of soup and grill for 20 seconds until the cheese has melted.

2 thoughts on “Last of the Onion Johnnies”