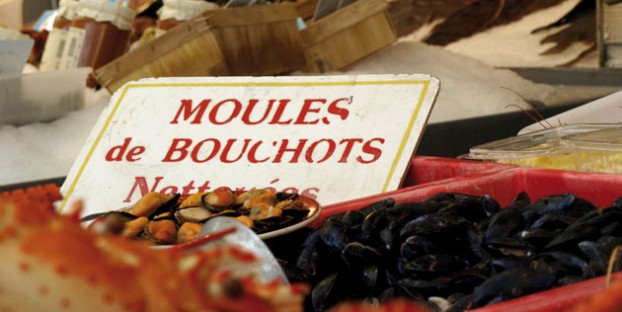 Moules de Bouchots – the Best in the World?

Cookery and travel writer Annie Bell spills the beans on a French treat so delicious that she can’t resist handing it on a plate to our readers.

It is said that the tide along the stretch of Normandy coast connecting Cherbourg to Mont St Michel comes in with the speed of a galloping horse. Anyone who has ever idled away a lunchtime sitting at one of the small cafés looking on to the shore will know that this is true.

In fact, a lunch of ‘moules marinières’ eaten while looking out to sea is one of the greatest treats that the west coast of the Cotentin Peninsula has to offer. So take yourself down to a sleepy fishing village (my own local waves being at Blainville-sur-Mer) and bag a ringside seat.

At high tide there is very little indication of the scene that will unfold a few hours later. A row of sleepy tin-roofed shacks sits just back from the sand dunes, a swampy estuary scattered with sheep on the other side. A concrete slipway descends into a dark green sea on a shingle beach where a handful of gents are casting rods and a few dippers brave the water. And then as the tide recedes, rocks start to appear like floating hippos, and then an entire underwater city reveals itself – a massive gridwork of mussel and oyster beds. And tractors with amphibious trailers loaded with fishermen start hurtling down the slipway, disappearing into the avenues in the distance. 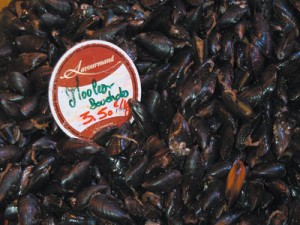 The lanky rows of poles strung with mussels rope are today part of the maritime landscape, but this hasn’t always been the case; it is a comparatively new industry that only took hold after the Second World War. But one thing is for sure – once tasted, ‘moules de bouchots’ will spoil you for life. These little orange darlings bear so little resemblance to the flabby white tasteless specimens too often served up as the norm that it’s difficult to settle for anything less thereafter.

Jean-Pierre Kerdual of Kermaree is a jovial second-generation mussel producer who looks as though he has enjoyed many a fine lunch. He cuts an imposing figure in a wetsuit – the uniform of the mussel gatherers who have to be at the ready to dive into the water to tend the poles.

“Here we harvest them young, elsewhere they are two to three years old,” he explains when I inquire about that intense sweetness and saline flavour.

Life for these small mussels begins on long coconut fibre cords that are slung between poles like a loosely-sprung mattress. Nurtured relatively close to the shore, by August they have grown enough to plant out on the poles further out. To get a closer look I don a pair of waders and we set off on a tractor with an amphibious trailer attached, on a bumpy ride out to sea, and within a few kilometres of the shore where the water has receded to knee-height depth, it is like descending into a mesmerising forest. In one direction there are poles wound round with the young corded mussels that look something like a wood of maypoles, and in another direction there is a forest of blackened obelisks. But inside, the mussels are orange, a colour derived from the plankton in the water. And it is this that makes them so distinctive.

They are fabulously tasty, as sweet as they are salty, and ‘a la marinière’ probably does them greater justice than any other way of cooking them. It also lets you get in there hands first, as part of the pleasure is the ritual of working your way through a bowl piled high with glistening blue-black shells. So let me take you to a small seaside café for lunch…

Bearing down on the beach at Blainville, to the left of the slipway, is a restaurant perched precariously on the edge of a dune, its terrace buoyed up by wooden stakes. There is no way of describing La Cale other than saying that it’s deeply eccentric. A rickety shack, the walls are hung with tapestries of nude Lolitas in garish colours and vintage framed photos of ocean liners, hung at such defiantly crooked angles that I’m convinced that Remy Voisin, the owner of this unique establishment, must get out his spirit level to ensure that they are sufficiently off kilter.

Far from putting people off, his deliberate stab at bad taste has turned the café into a ‘cause célèbre.’ It is now listed in the 2010 Guide Michelin Vert Normandie – not bad considering that the seating consists of a ramshackle collection of weathered and stripped down wooden tables and chairs that spills out on to a sandy terrace on the water’s edge. As a British visitor you will be asked to sign a petition behind the bar in support of Remy’s latest advertising maxim: “rosbifs welcome, frogs too.” So leave your PC concerns at home.

A scruffy blackboard menu tells it like it is: Bulots Mayo, Huîtres, Moules Frites, Grillades, Galettes Completes and Teurgoule. If it was any more organised (heaven forbid one of those laminated picture menus), there would be every reason for distrust. Stick to the basics in this neck of the woods and you are unlikely to go wrong, but be wary of ambition. If you want to eat well, then be prepared to embrace the simple rusticity of the least likely-looking restaurants. This is where you stand a good chance of eating the finest ‘moules marinières’ in the world.

At La Cale they are dished up in saucepans, a divinely messy feast. It’s hard to believe that the contents of the battered aluminium pan, wafting a cloud of sweet sea scent when the lid is taken off and full to brimming with glistening blue-black mussels, are all for you.

Working your way through the shells, there at the bottom is a pool of creamy liquor for dousing the thin crispy chips that are served alongside. It’s a serious business, and not a green vegetable in sight. The only thing to work it off is to go and dig a sandcastle, or walk along the shore and marvel at the distant scene of the mussel farms that have just treated you to an unforgettable culinary experience.

All you need is a big pot and a knife. Or if you’re the intrepid type, buy a large bag of mussels, light a fire on the beach and cook them in a pan suspended over a tripod.

Either way, you’ll be well served by the local fish market or shop, and the fish departments of most supermarkets also carry an impressive range of seafood – and local moules are a given. I love the loyalty that creeps in even at this level, where the fish department will proudly display mussels from the nearest beach. The next door ‘department’ where they are also farmed could be another country.

Moules marinières is classically a very elementary dish. We tend to trick it up these days, but La Cale serves the real thing, safe in the knowledge that they have to do very little to mussels which are so good, so fresh and so local – they’ve only travelled a few yards! At the restaurant there are about five pots on the go at any one time, with the waiting table’s number written in felt pen on the lid.

*Give the mussels a good wash in a sink of cold water, discarding any that are broken or that do not close when tapped. Pull off any beards and scrape off.

Moules are in season from June to January, and oysters are available all year round.

Dining La Cale style – La Cale can be found at: 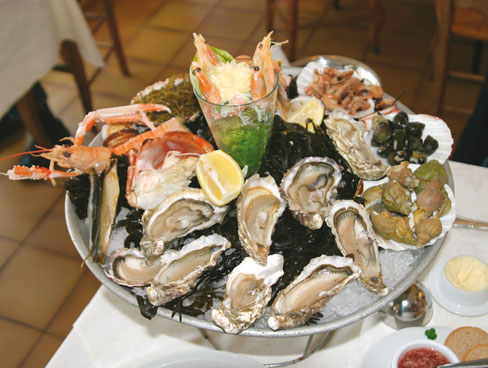 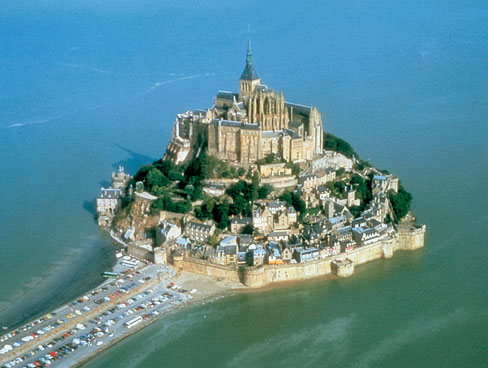 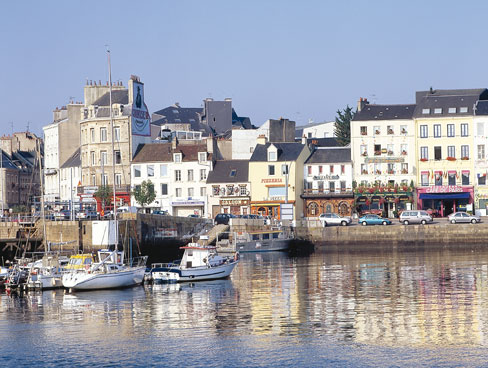 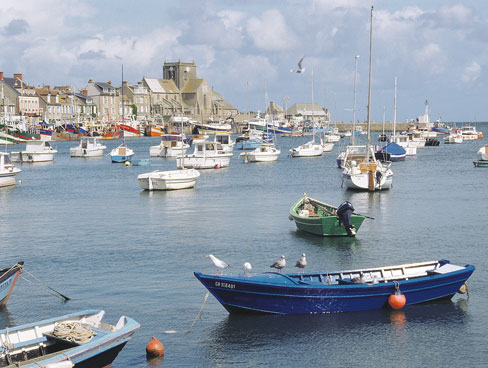 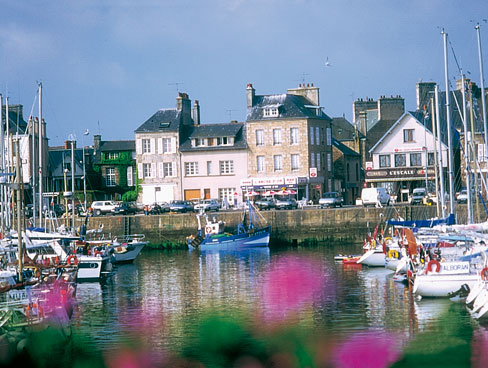